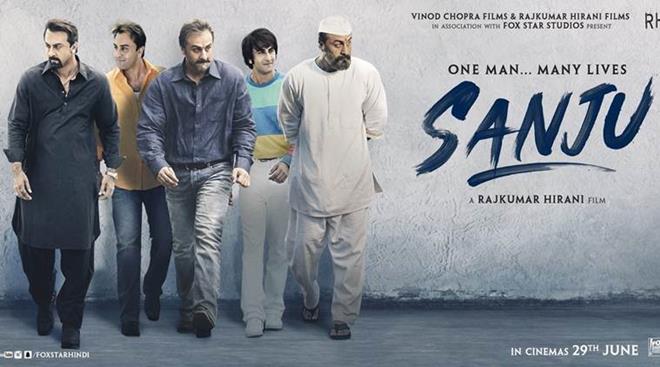 Sanjay Dutt’s life stories, different phases, the ups and downs he went through – everything is real, and the makers have depicted deftly.

Sanjay met numerous people in his life, a lot of them tried to bring him down along with his stardom, but his father Sunil Dutt gave him all the support he needed when he was lost. Sanjay Dutt’s life choices were no less than a roller-coaster ride. Making bad decisions as a teenager, to still continuing taking worse turns in his life as an adult, Sanju did it all! If it wouldn’t have been his father and his wife, Sanju’s life would’ve been completely different.

Anushka Sharma plays the role of his writer, Dia Mirza – Maanyata Dutt, Jim Sarbh – a frenemy, Manisha Koirala – Nargis Ji, Vicky Kaushal – his BFF! Paresh Rawal plays the role of his father Sunil Dutt, and the actor has done a fabulous job of being a great mentor. Jim Sarbh and his oh-so-cool accent made my heart beat faster, but it was Vicky Kaushal and his adorable gujju accent that won my heart. 😉

Ranbir Kapor is actually THE HERO in this movie; from an astonishing transformation to a striking resemblance to Sanjay’s body language, Ranbir has worked hard for this one!

Sanju is a light-hearted comedy, yet heart-wrenching story of an actor with many lives. This weekend, grab a tub and go for this one with your fam jam!

We give Sanju 4 buzzing bees!