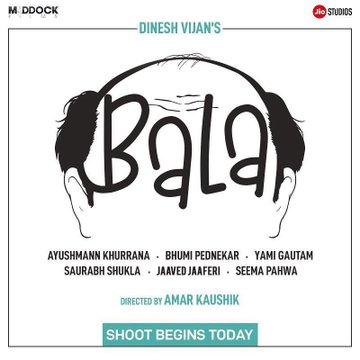 Just a few days ago we brought you the news that Bhumi Pednekar will be seen in Amar Kaushik’s Bala with the actor she debuted with – Ayushmann Khurrana. We like their chemistry in Dum Laga Ke Haisha and Shubha Mangal Saavdhan and are eagerly awaiting their third outing. What’s interesting now is that this film will star another actress who entered Bollywood in a movie featuring him.

Yami Gautam, who debuted opposite Khurrana in Vicky Donor, has joined the cast of Amar’s next. The slice of life film went on floors today. The makers tweeted –

Talking about Bala and reuniting with Ayushmann, Yami said,

“I’m excited to be working on Bala. It’s a great script, and a relevant concept and an amazing team working on it. It’s been an overwhelming time for me this year, starting with Uri and now with coming on board for Bala. We begin shooting for the film this week and I look forward to being part of another strong film with a great story backing it.”

The film is about Bala and his premature balding. Bhumi will be seen as dusky small town educated girl while Yami plays a supermodel based in Lucknow. The film will be extensively shot in Mumbai and Kanpur.