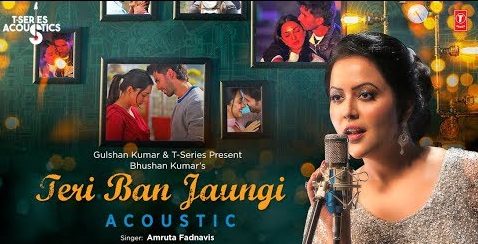 Kabir Singh is a raging success owing to its incredible story and amazing songs. T-Series and Amruta Fadnavis have collaborated to release the female version of the popular song Tera Ban Jaunga from the film. This version is titled Teri Ban Jaungi and is crooned by Amruta Fadnavis.

Commenting on the partnership Amruta says:

“When they asked me to sing one cover song from Kabir Singh, I immediately selected ‘Tera Ban Jaunga’ as it’s my favourite song from the film. We wanted to do a female version of the song and have titled it ‘Teri Ban Jaungi’. I really loved the music and the way Tulsi Kumar and Akhil Sachdeva have sung it.”

On collaborating with T-Series and Bhushan Kumar, Amruta says:

“They are the pioneers in music. I love collaborating with them and being part of such beautiful music.”

Tera Ban Jaunga was sung by Tulsi Kumar and Akhil Sachdeva. The popularity of the song was one of the key reasons why they wanted to release the female version.

More Latest News
Tulsi Kumar: I am always willing to learn something new
Sid Mallya Celebrates A Year Of Being Alcohol Free
To Top