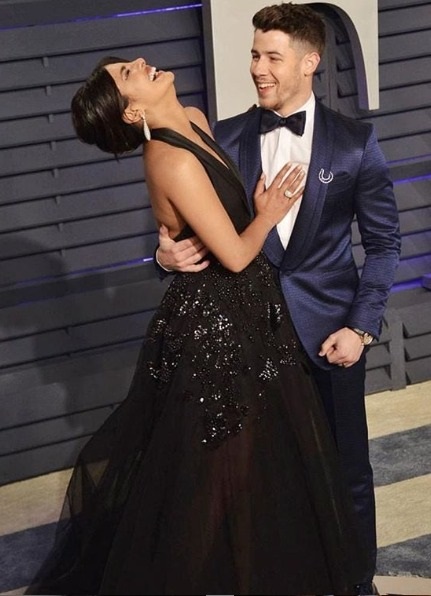 Priyanka Chopra: I would love Nick to run for President

Desi Girl Priyanka Chopra has won hearts of people globally with her hard work and dedication, she made a noticeable appearance at the Cannes lately and is doing well both professionally and personally, her chemistry with husband Nick Jonas is for everyone to see.
In a recent interview to a leading daily, Priyanka Chopra said she would be happy to run for the Prime Minister and would love if Nick Jonas would be the President.
This is what the Quantico actress had to say,

“I don’t like the things associated with politics, but I know that both of us really want to make a change. Never say never,”

Priyanka said she has tried to remain political throughout her life because she likes to “cheer for humanity”.

The actress feels husband Nick would make a great leader. she said.

“He’s not afraid to use the word feminist and I love that,”

“I call him Old Man Jonas. That’s my name for him OMJ. He’s such an old soul, extremely smart, so good for me because he grounds me so much. ‘I’m a wild child, I do whatever I want, whenever I want and he always supports me.”

Priyanka Chopra is having a purple patch with both personal and professional life, on the work front, she will be seen opposite Farhan Akhtar in Shonali Bose’s The Sky Is Pink.

It would be exciting to see our own desi girl back doing a Hindi film after Jai Gangajal. The Desi girl is taking care of everyone’s expectations by balancing Hollywood and Bollywood project with utmost style.

More Latest News
Sonakshi Sinha : These Are Some Of The Power Packed Dialogues By The Actress
Akshay Kumar Back In Bangkok For This Reason?
To Top