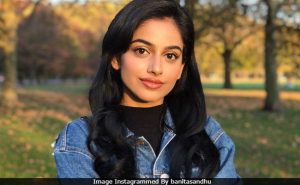 Banita Sandhu who made her debut in Shoojit Sircar’s October alongside Varun Dhawan has now bagged a part in American TV sci-fi show Pandora. The actress has not signed any Indian project apart from Diljit Dosanjh’s music video after October.
Earlier this week, the announcement was made that Priscilla Quintana will play the lead role in CW networks‘ upcoming TV show Pandora apart from her Banita Sandhu, Oliver Dench, Noah Huntley and others also included in the cast.
The show is currently under production and will be shot in Bulgaria.
British born actress Banita Sandhu took to Twitter to express her excitement,

“So thrilled to announce my next project with @TheCW ”

She has appeared on a various Indian TV commercial in Vodafone, Double Mint Chewing Gum, etc. She also worked as a child artist in different TV shows and films when she was barely 11 years of age, however, she has now transformed into a full-time model and actress and now landed a part in Pandora.

More Latest News
Ayushmann Khurrana To Play Gay In Aanand L. Rai’s Next
Dhvani Bhanushali Opens Up About How She Manages Her Academic And Music Career
To Top