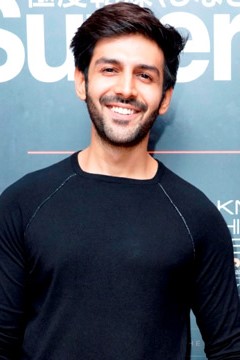 During group interviews with the heartthrob Kartik Aaryan, the actor was asked about him being the face of comedy and about his struggling days.

Read on to find out what he had to say:

What was that kept you going on initially?

“I have always been positive. I shave always been someone who has taken rejection also in a positive manner. You will always see me laughing. Even during my struggle days, I used to be smiling and having fun. I believe in the law of attraction. I believe that the person in front of me is at loss. The second thing is that I don’t stop working on myself. And I don’t give up. “

You have done a comedy. So would you like to play a dark or intense character?

“Playing a dark, serious and edgy character is easy for me to pull off. I find doing comedy difficult. I know it is shocking as I am doing comedy since my first film.
So this is set in the minds of people that he does comedy very nice. At that time I am like my timing is nice but I feel I would do emotional, romantic, dark and serious characters better. I am a fan of Breaking Bad and Black Mirror so I wanna do something like that. I had said this before also that the role played by Shah Rukh Sir in Darr and Baazigar that is what attracts me the most. I wanna do something like this and I will in the future.”

Well, we would love to see you play any character Kartik.