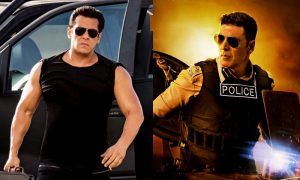 EID 2020 would have twice the fun for Bollywood fans as it will see Salman Khan and Akshay Kumar star at the box office. Sanjay Leela Bhansali’s Inshallah will be clashing with Rohit Shetty’s Sooryavanshi in EID 2020.

Sanjay Leela Bhansali’s Inshallah — which stars Salman and Alia Bhatt — is said to an eternal love story. The film marks the reunion of Salman Khan and Sanjay Leela Bhansali after 20 years, the last film they did together was Hum Dil De Chuke Sanam.

Rohit Shetty’s Sooryavanshi — which is an addition to the Rohit Shetty’s Supercop universe – stars Akshay and Katrina Kaif. The film is about Veer Sooryavanshi, chief of the Anti-Terrorism Squad. He was introduced with a cameo at the end of Simmba.

Akshay Kumar took to Twitter to say this about his excitement on collaborating with Rohit Shetty,

Normally stars and movie makers look at ways to avoid clashed but it doesn’t seem to be happening here. An informed source said,

“Neither film will move out. It is being presumed that Akshay and Rohit Shetty will bow out because Eid traditionally goes to a Salman starrer, also because Rohit and Akshay have compromised and moved forward their release in the past. But not this time. Sooryavanshi will take on Salman’s Inshallah.”