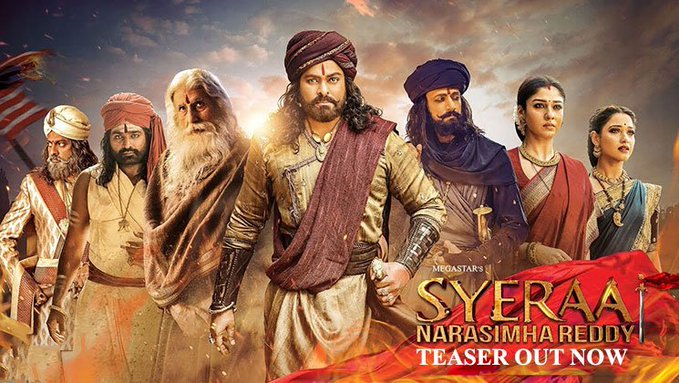 Yesterday the makers of SyeRaa Narasimha Reddy released the poster of the film increasing our excitement for the film’s teaser. Today the teaser of the film was launched.

At the teaser launch, Megastar Chiranjeevi was asked how it was working with Amitabh Bachchan. To this he said:

“Amitabh Bachchan is my mentor. He is amazing. And according to me he is the only Megastar the industry has.”

“When Ram Charan told me that he wanted to cast Amitabh Bachchan for the role of my guru in the movie, I told him I will speak to him. I called up Mr. Bachchan and told him that I want him to play my Guru’s charcter, he said that you don’t need to ask. He immediately said yes.”

A journalist even asked the Megastar about the changes he found in the Hindi Cinema currently. To this he said:

“Till 2007, I was in field and then I stopped acting. Then again I did acting in 2015. At that time only I saw a lot of change in the film industry. And there were both negative and positive things. When I joined the industry to what it is now, the environment, atmosphere everything is different. It will change even further.”

Directed by Surender Reddy and produced by Ram Charan under the Konidela Production Company banner and Excel Entertainment, SyeRaa Narasimha Reddy is all set to release on 2nd October, 2019.

More Latest News
Jackky Bhagnani: Music is life, that’s why our hearts have beats
Priyanka Chopra Jonas Joins The Cast Of Netflix’s We Can Be Heroes
To Top