The remake of David Dhawan’s Judwaa, starring Salman Khan, Karishma Kapoor, and Rambha did leave everyone with a lot of expectations. And yes, Judwaa fans were secretly praying of Varun not ruining the most iconic film for the Bollywood movie lovers!
Brace yourself, guys! The first trailer of Judwaa 2, starring Varun, Jacqueline Fernandez, and Taapsee Pannu is out and it has left us excited for every damn reason on this planet.

The trailer is impressive in every sense possible! Varun’s attempt at re-creating Salman’s magic is quite evident throughout this 3-minute trailer. While Tapsee will be seen essaying the role of seedhi-saadhi Rambha, and Jacqueline is all set to step into Karishma’s shoes. 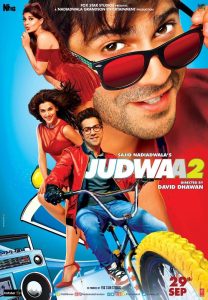 From Salman’s signature step to the bathroom scene, Judwaa 2 trailer has got it all.