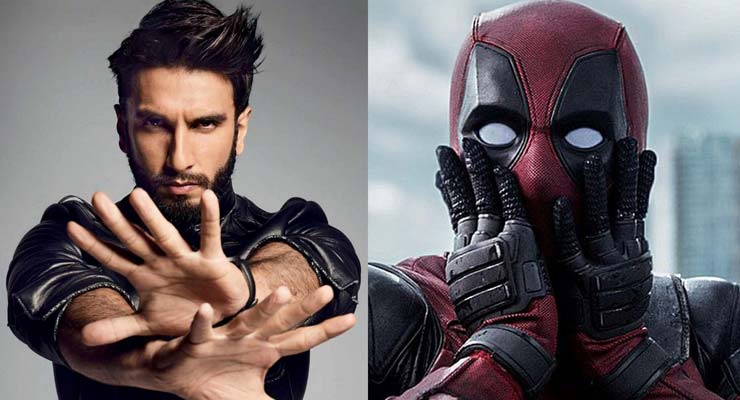 Deadpool is certainly the quirkiest superhero who will mouth the funniest line, even when he’s beating the hell out of others. The first film was a superhit and Fox Star Studios, have ambitious plans to make the sequel an even bigger success.

They have roped in the massively popular youth icon, Ranveer Singh, to dub for the character of Deadpool for its Hindi version. Fox wanted a star who would resonate with Deadpool’s personality and Ranveer’s wit and edgy personality was a perfect match.

Deadpool 2 has already created a massive buzz around the globe with its witty dialogues and outrageous action sequences. But now with this news which seems to be the biggest West Meets East collaboration, Deadpool 2 promises to pack a BIGGER punch!

The film and the Hindi Trailer will be A-rated as they will stick to the tone and irreverence of the English film which has Ryan mouthing cuss-words, to heighten the impact of humor and the style of story-telling that Deadpool is known for. Ranveer understood the reason why he had to mouth cuss words since the studio wanted to retain the humor and USP of what Deadpool stands for even in the Hindi film. The Hindi trailer which releases today is a riot because Ranveer has added his own masala to make even this version stand out.

“Like Deadpool, Ranveer is known for his smart, witty with irreverent humor. He’s a hugely daring and powerhouse actor and we absolutely relished having him on board for our biggest super-hero film.”

Deadpool 2 will hit theatres on 18th May.

More Latest News
Here’s The Official Trailer And Poster For Solo: A Star Wars Story
Jacqueline Fernandez All Set For Her Hollywood Debut
To Top